I’ve heard and read a lot of stories from different countries, but I’ve never heard anything from mine. So why don’t I tell you about one Barcelona rat? It seems that there are only stories about writers here, it’s even a famous country for skateboarding, but stories about people going into places off limits? Rare, very rare. I’m not trying to justify this text, but maybe it’s a starting point for me, an introduction of sorts. Like hello there, I’m a southern rat and here’s my view about exploring in southern Europe (maybe even north Africa).

Sorry about my English, I decided to write this in English, not through Google translate, writing straight on paper, figure that, in a language that I don’t control at all. My native language is used only by 6 million people and I was bad at school so my English could sound ridiculous. Even my name sounds weird to foreigners. Bah! I don’t care, those who have been shown respect at this point are by far best people. Sometimes you meet people going around, and you can feel some partnership with them even if it’s limited ’cause of language matters. My ‘nigguh’ here will check this before publishing it, just to grantee quality and of course saving me from looking like an idiot. He’s from some Anglo-Saxon island, so he knows the Shakespeare language and does metro too.

Try this at home, write in another language but the fact is that in this depressed city there’s nobody interested in this kind of stuff at all, excluding a few local rats, hipsters or friends so it doesn’t make any sense to write it in my language. Here there’s only a bunch of dick heads, mostly wankers, that only goes derping in the most sad way: flash & HDR. As well as talk shit in internet forums trying to preserve some ridiculous kind of sect. Shame on them. The ‘admins’ of that poor move sin of pride. Idiots. Rats don’t know about ‘moves’. We run in small packs. We are loners, we don’t organise expeditions. Sometimes it has been a pleasure for me to lead rats from other countries into places I’ve found here, but it works both ways and that’s what I’m going to expect if I go to their city. But for now I don’t have enough money to travel, some day it’s gonna happen. The nice thing is that I’ve learned few tricks hanging around and exploring with those who came here. Thanks.

I like to think that in life there’s plenty of doors to open that could be opened, maybe someone could help you to open that door whilst others will be opened by virtue of your own achievements. In a figurate way of speaking some doors won’t open, others could be destroyed, some you’ll never find, but for sure doing this kind of activity and on your journey of self improvement you will deal with fear always. The fear of suffering consequences for your acts, kissing that woman may lead you to somewhere unexpected, breaking that padlock too. Fear. that’s how this world is ruled. The ones who scare and the other ones who fear. Fear of getting kicked out of the system, the fear of a fine, of being a father or to get jailed. Sometimes even fear of looking like jailed by being a father. Fear of getting hit by a train. The fear of being electrocuted by a cable in a tunnel. Fear of becoming poor. Fear of loosing your love, your family, your friends just for being yourself to the ultimate consequences. Fear of being a slave to the opinion of others. The fear of being who you must be. The fear of fearing. Everyone deals with his own fears. Those who say they don’t have fear are the most weak amongst the weakest.

I’m not considering myself as a strong man. I have fear. But I use it, I learn from it. As much I know, more fear I feel. Ignorance is the strongest way of living for sure as I looked back to those days of ingenuity, maybe you could call it bravery, of getting inside a metropolitan subway system without knowing the dangers and secrets. I get a feeling that’s a mixture of sadness and melancholy for those days that will not come back again. Like childhood. We walked for hours underground, quietly, with a smile on our faces but now paranoia makes me weak. I can feel rat traps everywhere. Dozens of times each night when we go into the metro after-hours the fear for that trains we’ve dodged haunts me. Every grid you open, the more sneaky you are. Except when you become a superheroninjadeadthlywarrior after 8 beers trackside of course.

For those who might be interested my roots are in graffiti. I started wandering in yards, halls of fame and random streets some years ago, with photos of my paint being my most precious treasure. So one day I decided to stop doing what I saw in Style Wars to do something that I used to believe was born from myself solely. What an idiot I was. Hundreds of people have done the same but at least I did it straight from my heart, with passion and enthusiasm. Enjoying it. The best part of the process is that I’ve been doing it with friends that have become true partners forever, that are still on my side and will be for years to come. I liked more the strange or weird places to do graffiti than the graffiti action itself. My artistic skills were busy working but my mind went derping. I spent several years lurking and taking pictures in buildings, areas, structures… The places I’d once painted in. A long path just to find myself close to my roots again.

So here am I writing about vent life. So what is this fucking word? well it’s easy and fast to ask for tips and details, to know how to get into that beautiful abandoned subway station, the wrongly so called ‘ghost stations’. Too many guys get boned with that word. But no, the stations are real, not ghosts, there’s no ectoplasm underground. The true fact is that I have spent a lot of nights trying to get in. Nobody told me how to do it. I walked the city for hours looking at the pavement, always searching for grids to open and trying and trying, even made keys to open the locked grids. There’s no map to show where the right vents are, maybe there is, but I don’t have one. Instead I have my own handmade map. What I want to explain with that word is all the efforts we’ve done going into vents every week, with a lot of failures behind us. Always we learn from mistakes, that’s how it works.

The main thing here is to do what you most enjoy as much as you can. If you enjoy that, the trying, the process before and after and sharing the places then do it. For sure someone will look at them and like them. They will appreciate them. That’s all. No business in that. It’s not fame seeking it’s just for fun, just to get dirty and play the rat a bit. To feel like a child again. For me it’s not a matter of who has the biggest balls. Going down there three floors of ladders isn’t a dangerous thing to do, not when you’ve seen some guys climbing towers in China or the fact that hundreds of well trained adventurers die each year in the mountains. It’s not even a matter of being the first to get in. What a stupid thing to think. There’s plenty of people that lurks everywhere. You think you’re the first one? Then you’re an asshole. Take a look around, walk again and again the same streets at night. You will realize that you’re not alone.

Maybe sometimes you’re going to reach places without any trace of previous humans, except the ones who built it of course and this places to you is like a hidden treasure. Good. After being in all the abandoned stations in Barcelona, it’s not a competition, one station leads you to another one, just being curious. After all of that, you are going to want more. More rare tunnels, more unseen places, every new shape you found becomes a pleasure. And it’s how it works, naturally.

Perhaps after all this bullshit i’ve written, the fact is that it’s a matter of behaviour. To be as bad as possible. Well guys, take care out there. I don’t give a fuck about being bad, love wins always. Be and do whatever you want. I’m going to do that. What you think about it isn’t my business. Live and let live as should you all. Meanwhile in a city that seems the whore house of Europe I’m going to try to do my best just for my own pleasure, my own risk, success and knowledge. Tunnel love. 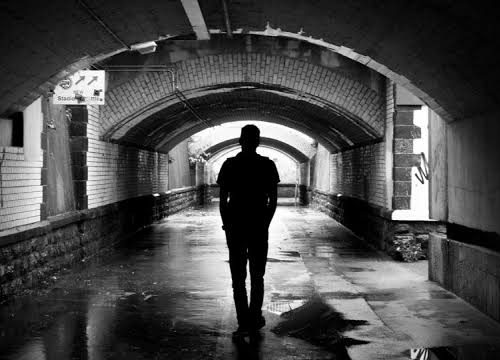